Pharmacy groups unite to laud bipartisan Congressional focus on closing the loophole that inflates drug costs for patients and Medicare, and jeopardizes pharmacies

Washington, D.C. – Nearly a quarter of the House of Representatives – 105 members – has sent a letter to President Donald Trump noting the “missed opportunity” to reduce seniors’ out-of-pocket costs for prescription drugs. This missed opportunity occurred when pharmacy direct and indirect remuneration (DIR) fee reform was excluded from a recent Medicare rule. 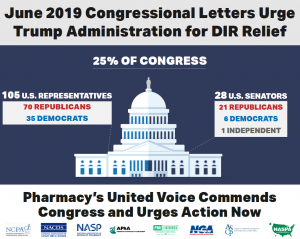 The letter from House members cited Centers for Medicare & Medicaid Services data indicating that “DIR fees on pharmacies participating in Part D grew by 45,000 percent between 2010 and 2017.” The House members said, “This increase is unacceptable and unsustainable, and creates uncertainty not only for community and specialty pharmacies, but also for the patients who rely on Part D for prescription drugs. Until pharmacy DIR fee reform occurs, seniors will continue to pay higher cost-sharing for their prescription drugs.”

The pharmacy organizations said: “We appreciate this strong and bipartisan demonstration that DIR fee relief is needed now, to deliver savings to patients and to the Medicare program, and for the viability of pharmacies. It is essential that this powerful statement is translated into action on DIR relief this year, through Executive Branch action, through inclusion in drug-pricing legislation, or both. Reform is needed to address the gaming of the system through DIR fees, and to work toward pharmacy-specific metrics to enhance patient outcomes and appropriately evaluate pharmacy performance.”

The abuse of DIR fees is a result of a regulatory loophole. Payers claw back reimbursement paid to pharmacies for Medicare prescriptions, often more than half-a-year after the transaction. They allege that these fees are based on quality performance, yet these metrics lack transparency, vary widely, and often do not reflect areas under pharmacy’s control.

Information about the participating organizations is available via their websites: